Barr returns to the podium at Brands Hatch 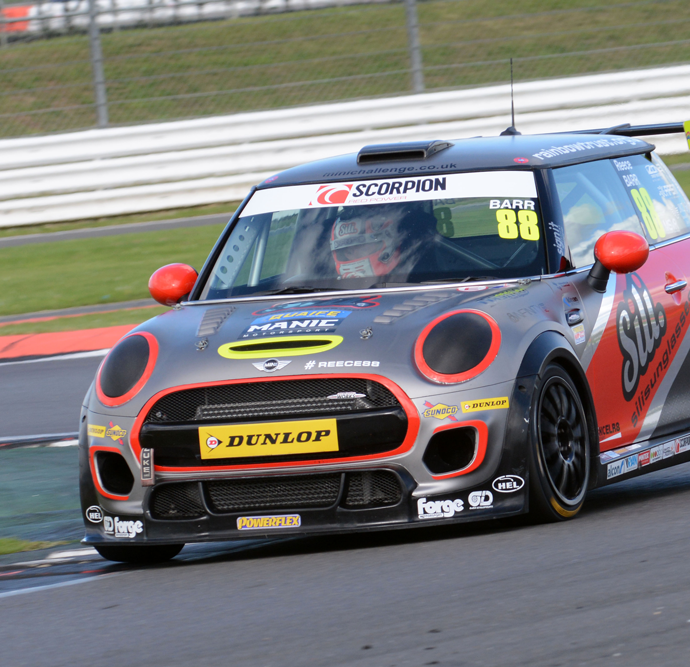 Coming off the back of a mixed weekend last time out at Silverstone, Reece Barr was keen to get his championship challenge back on track for the first of this season’s two non-British GT Championship supporting rounds at the Brands Hatch Indy Circuit. Having diagnosed some engine woes with his Sili Sunglasses Mini JCW during the last event, the Donegal man was hoping that his issues for the year were now put to bed.

As he has done on many of the previous rounds to date, Barr rocketed straight to the front of the pack during the event’s pre-event test, and more noteworthy, his first laps around the short and challenging Brands Hatch Indy circuit. Setting himself up well for qualifying, Barr’s weekend was about to take a slight twist. The short nature of the Kent circuit meant that getting a clear lap was going to be a test in itself. With several of the ExcelR8 Motorsport driver’s laps compromised in traffic, he finally hooked up a lap towards the end of the session only to be forced to abort that one also when the red flags were displayed to aid the recovery of James Turkington. Up to that point, Reece’s best effort placed him in tenth, where he would remain with the session being prematurely ended.

Starting from the outside of row five, Barr knew the first of three races this weekend was going to be tricky to make up ground around the notoriously difficult to pass Indy Circuit. However facts and figures weren’t going to stop him, off the line Reece had already made up two positions, to move into eighth and he wasn’t going to stop there. Working his way up into the top six, the Safety car was then deployed and on the restart Barr found himself getting shuffled down to eighth where he would remain to the chequered flag.

Following the opening race of the weekend, the ExcelR8 team were back burning the midnight oil, having discovered a few further issues with the #88 Mini JCW that included low fuel pressure and a fault in the front suspension. Going into race two with a clean bill of health, Reece lined up in eighth and keen to show his strong form at moving up the order. Once again as the lights went out, the Donegal teenager didn’t hang around and by the time the first of two Safety car periods got underway on lap six, he had moved up two places to sixth. Following the second restart, Barr was on the move again working his way into the top five. In the end, the race finished with a red flag and the Sili Sunglasses driver secured a superb fourth overall and top rookie driver.

Starting Sunday afternoon’s third and final race of the weekend, Barr was hoping this would be his chance to finish his weekend on a high on the podium. Compliments of the reverse grid draw, Reece lined up on the inside of row two on the grid. Despite getting a good start, traffic shuffled the 16 year old down to fifth early on. But by lap five he was already on a recovery charge moving into fourth, and followed it up just five laps later with a superb move into third. After a thrilling battle with Brett Smith, Reece secured his podium place to take the chequered flag in third, his fourth weekend on the podium from five weekends so far this year.

Reece Barr – #88 ExcelR8 Motorsport Mini JCW:
“That third race was just hard, really hard and my tyres were shot at the end so holding off Brett [Smith] for P2 was just impossible. His finishing pace was something else and I also saw Charlie [Butler-Henderson] coming at me so continuing the enjoyable battle with Brett would’ve lost me the podium, but it all came good in the end. Overall I’m happy with this weekend. Qualifying set us back a little but from there once we got the few gremlins in the car sorted after a mega job by the ExcelR8 boys, I was able to push on. Next up we are back here again with the British GT Championship on the Grand Prix circuit which should be good.”