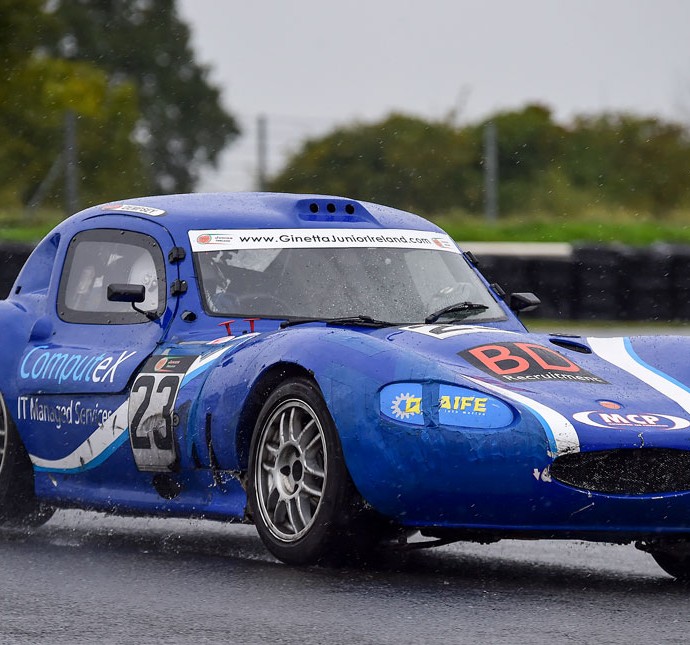 15 year old transition year student Patrick Dempsey from Corofin, Co.Galway, has become the youngest ever Ginetta Junior Ireland Champion after taking a superb double race victory in some challenging conditions this weekend at Mondello Park. His achievement, is all the more noteworthy given this season is his first full season racing in cars and included nine pole position starts from the championship’s 12 races. Ginetta Junior Ireland is the only championship in Ireland for 14-17 year old upcoming racing stars.

The 15 year old student of Holy Rosary College, Mountbellew, impressed right from his first outing in the series in mid 2016. Forced to only partake in a part programme last year having only turned 14 in April, Dempsey’s first weekend saw him take a podium finish in Kirkistown. From there, he went on to finish in the top five in the championship and secured the best newcomer of the year award.

With a wealth of experience under his belt, Patrick’s intentions for the 2017 season were clear – to win the overall title. A season long battle with the older and more experienced Cameron Fenton saw the pair trade paint and places throughout the year.

Coming into the final weekend of the season around Mondello Park’s International circuit configuration, on dropped scores the pair were tied at the top, so both of the days races were set to play a crucial part in deciding the final placing. In qualifying, it was Dempsey who laid down his marker to secure a pole position start for the opening race of the day.

When the lights went out, Fenton shot across the circuit and combined with Dempsey’s poor getaway, the pair made light contact. Slotting into second, Patrick remained with the leader, carefully awaiting his chance to make a move for the lead. In the closing stages of the race, Dempsey was now right on the bumper of the race leader. Coming into the first corner, the Galway man started to make a move and the pair exited the corner side by side. With a better exit, Dempsey was ahead, and coming out of turn two Fenton spun trying to retake the lead, allowing Dempsey to cruise to the finish and take a fine race one win.

With the second and final race of the weekend set to run on a soaked Mondello circuit, the championship protagonists lined up on the front row of the grid. Starting this time from the outside of row one, Patrick got a superb start off the line to shoot straight into the lead. With his rival Fenton slipping to third, the path was clear for Dempsey to set off on building his advantage in front. Despite his rival making his way up to second place, Patrick was well ahead in the lead and taking the chequered flag, his winning margin was almost 20 seconds in horrendous conditions.

Patrick Dempsey – #23 Team MCP Ginetta G20:
“It feels absolutely amazing to win the championship after such a tough year and what a way to finish my first full season in cars as the Ginetta Junior Ireland Champion! I couldn’t have asked for a better weekend to seal the championship. Especially with such a dominant win in the very wet race two. I couldn’t have done it without the support of my family, my sponsors Computex, BD Recruitment and Forde Scaffolding and of course Morgan and Jordan Dempsey and all the lads at Team MCP who have prepared such a great car every weekend.”